For most of the year, the Lena River Delta—a vast wetland fanning out from northeast Siberia into the Arctic Ocean—is either frozen over and barren or thawed out and lush. Only briefly will you see it like this.

After seven months encased in snow and ice, the delta emerges for the short Arctic summer. The transition happens fast. The animation above, composed of images from the Moderate Resolution Imaging Spectroradiometer (MODIS) on NASA’s Aqua satellite, shows the transformation from June 3-10, 2019.

At this time of year, relatively warm water flows northward from the Lena River; this warms and awakens the delta. River ice melts, breaks up, and gets flushed out of the Lena’s branching river channels. Snow and ice on the surface of the delta also begin to melt.

In the animation, water flows more freely toward the ice-capped Laptev Sea, but it still faces obstacles. Unable to penetrate the permafrost in the ground, and blocked by ice remaining in the river channels, the meltwater produces a huge but short-lived flood. The flood spreads across the delta and over the adjacent sea ice in the Laptev Sea. Sea ice that is grounded—that is, attached to the seafloor—gets submerged; non-grounded sea ice floats to the surface. As the sea ice near the coast melts completely, dark blue seawater is exposed. 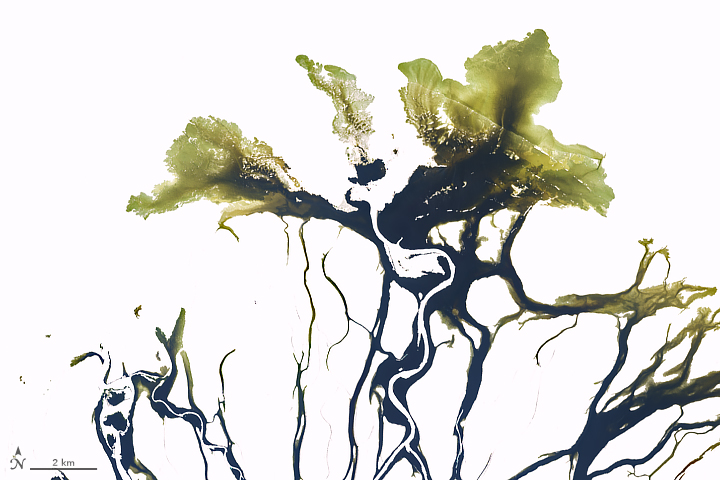 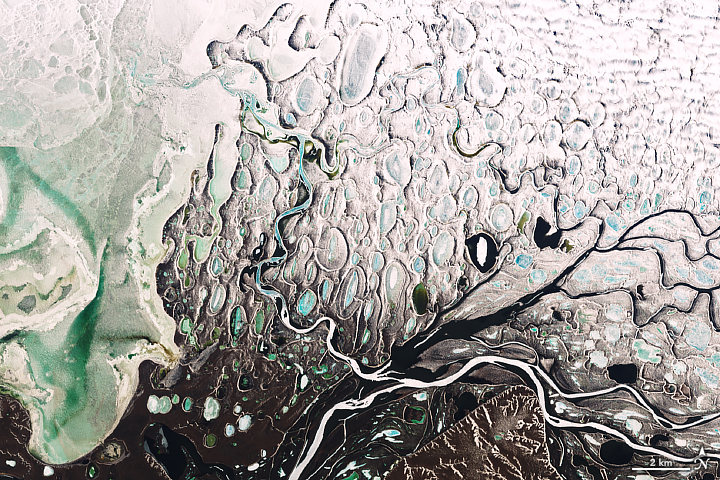 Green areas are likely the result of organic matter (debris from leaves, branches, and peat) dissolved in the water. Siberian rivers tend to contain a high concentration of colored dissolved organic matter (CDOM). The spring meltwater also carries sediments that are sometimes deposited on the ice and adding color to the water.

The green color near the delta’s edge is especially visible in the first image above, acquired June 4, 2019, by the Operational Land Imager on Landsat 8. You can also see relatively deep river channels traced by bands of bright ice that has broken from the channel edges and floated up. This ice is slower to melt because it absorbs less heat at its surface compared to flooded ice.

The second detailed image, also acquired June 4, shows the delta’s western side, where the modern, active part of the delta meets the older, drier parts. Water ponds in depressions in the ground formed from thawed permafrost. At the time of the images, these “themokarst lakes” remained frozen, but the delta will take on a completely different look soon.