The Urbanization of Ulaanbaatar

Mongolia’s capital, Ulaanbaatar, sits near the confluence of the Selbe and Tuul rivers on a plateau at the foot of a large, forested mountain. This was not always the case. When the town was initially established in the 1600s, it was a migratory settlement built as a center for Buddhist priests. It changed locations more than two dozen times.

Ulaanbaatar settled into a permanent location in the 1700s, but it remains a place of rapid change. These days, the growth is mostly outward into low-density neighborhoods that have emerged on the fringes of the city, particularly in river valleys and hillsides north of the city center. Migrants typically set up gers, the circular, herder tents that nomadic people have traditionally used in the Mongolian steppe. In contrast, the core of the city features Soviet style architecture—grand neoclassical government buildings and grids of rectangular, multi-story apartments that were mostly built in the 1960s.

Several teams of scientists have used Landsat images to monitor how the city—particularly the ger districts—have changed over several decades. According to some estimates, ger districts now hold more than 60 percent of Ulaanbaatar’s population.

The Landsat 7 and 8 satellites captured these natural-color images of the city in 2000 and 2018. Notice the development in the river valleys (green linear features) that lead out of the city. Note also how forested areas in the hills north and south of the city have lost tree cover over the years, probably due to people harvesting wood to heat their homes. 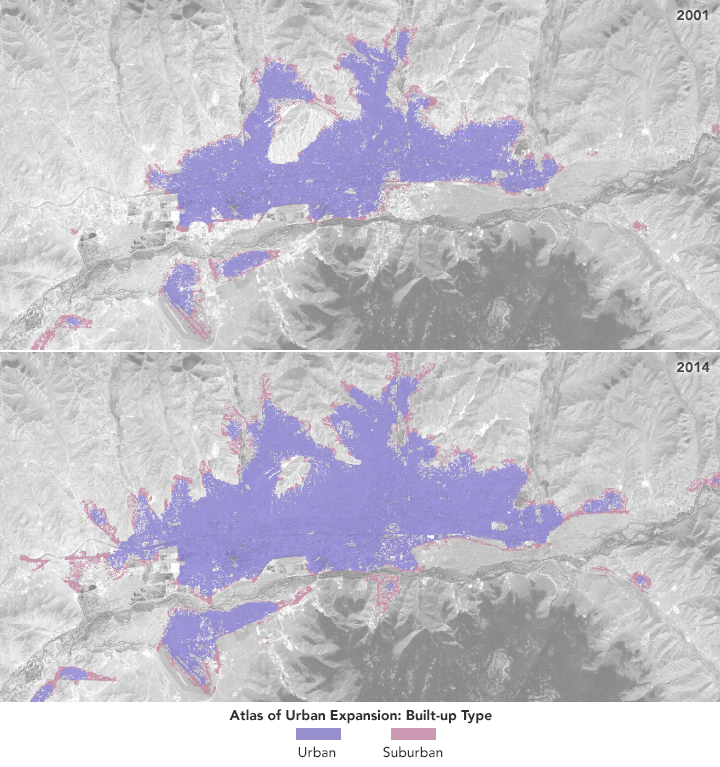 The Landsat-based maps above, which show data from the Atlas of Urban Expansion, make it easier to distinguish developed areas. Researchers defined urban areas as those with at least 50 percent of pixels classified as “built-up,” and suburban areas as those with 25 to 50 percent of pixels built-up. (Built-up areas well beyond the center of the city were not included in the visualization, but you can explore exurban built-up areas here.) Between 2001 and 2014, Ulaanbaatar’s population increased by 4.1 percent each year (from 630,000 to 1,070,000 people) and the built-up area increased from 11,894 hectares to 20,051 hectares (46 to 77 square miles).

Migrants from the countryside have been moving into the city in large numbers since 1992, the year that Mongolia adopted a free-market system and abandoned central government control of the economy. Around that time, lawmakers passed a bill that entitled every Mongolian citizen to 0.7 hectares of land within a city for free, a law that helped entice hundreds of thousands of people to move. Meanwhile, cold spells known as dzuds caused such severe damage to livestock across multiple winters that many rural Mongolians were forced to move to survive.

The rapid migration of people into the city has come with consequences. Many of the gers that people have set up are heated with wood or coal, which has significantly increased air pollution. Ulaan Baatar’s air is among the most polluted in the world, and particulate concentrations in the winter air have occasionally exceeded safe levels by more than 100 times. In addition, many homes in ger districts lack access to electricity, paved roads, and sewers.

NASA Earth Observatory images by Lauren Dauphin, using Landsat data from the U.S. Geological Survey and urbanization data from the Atlas of Urban Expansion research by New York University, in partnership with UN-Habitat and the Lincoln Institute of Land Policy. Story by Adam Voiland.