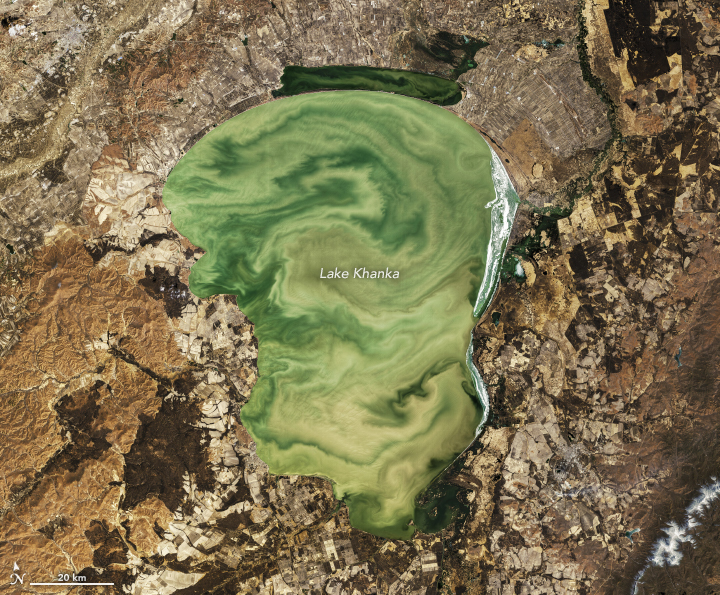 A witch’s cauldron. Gastrointestinal reflux. A kale smoothie. The green swirls of this satellite image may conjure up many mental pictures—except what it actually is. On April 12, 2019, the Operational Land Imager on Landsat 8 acquired this image of Lake Khanka.

This shallow freshwater lake is located on the border of Russia and northeastern China. The green hues in the water are most likely chlorophyll-rich phytoplankton in the lake, which contains a fairly constant presence of diatoms. The phytoplankton and other suspended solids in the lake are easily mixed by wind. This mixing of material between the surface and bottom often clouds the water, which usually starts to lose clarity in less than a meter.

The microscopic particles and organisms can be seen in great detail due to a special editing technique that combines scientific expertise and an artistic touch. Like a photographer adjusting lighting and using filters, Norman Kuring of NASA’s Ocean Biology group works with various software programs and color-filtering techniques to draw out the fine details in the water. The swirls in the water are all quite real; Kuring simply separates and enhances certain shades and tones in the data to make the biomass more visible. Without Kuring’s processing of the subtle colors in the image, Lake Khanka can appear less compelling.

As one of the largest freshwater lakes (by area) in Far Eastern Russia and China, Lake Khanka (known as Lake Xingkai in Chinese) plays an important role in supporting biodiversity. It is a major source of freshwater for birds (particularly waterfowl) and home to some of the highest levels of bird diversity in Eurasia. Khanka is also home to many freshwater species of fish and aquatic animals, including a large population of rare Chinese soft-shelled turtles.

The lake is surrounded by open lowlands, wetlands, grassy meadows, and swamps, which also contain many rare and endangered plants. The lake has been designated as a Ramsar Convention Wetland Site, promoting conservation and sustainable use of the wetlands. The lake is also included on UNESCO’s “World Biosphere Reserves” list.