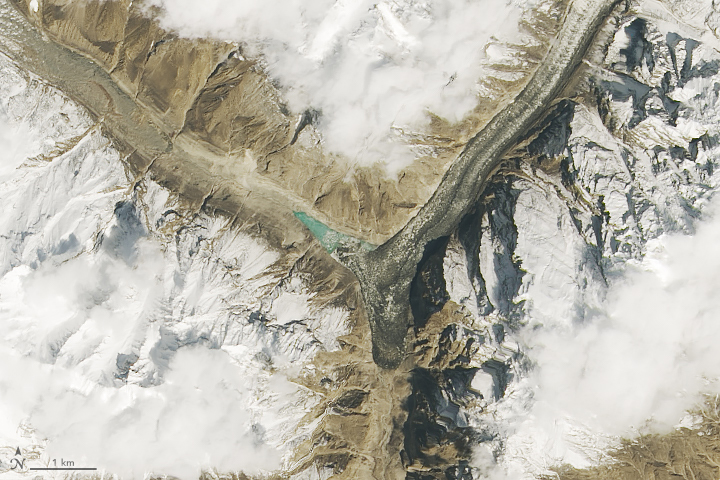 While most Himalayan glaciers are retreating, about 200 in the Karakoram Range are doing the opposite. Scientific and military authorities in Pakistan are monitoring one of them closely due to the potential for flooding.

About 1 percent of the world’s glaciers surge. These glaciers cycle through periods when they abruptly flow several times faster than usual. At peak speeds, surging glaciers can advance several meters per day—fast enough to block streams, bulldoze trees, crash into roads, and damage infrastructure. Surges typically last for a few months (and sometimes several years), and are then followed by a period of little or no movement that can last for a decade or longer.

One surging glacier in northern Pakistan sits near Mount Shishpar (also Shisparé or Shishper), a 7,611-meter peak in the Hunza District. In April 2018, the debris-covered glacier started to accelerate, with certain parts moving as fast as 13 to 18 meters (43 to 59 feet) per day. Since the surge started, the front of Shishpar Glacier has advanced by about 1 kilometer. As the ice pushed south past an adjacent valley, it blocked a meltwater stream flowing from the neighboring Muchuhar Glacier. By autumn 2018, the water had pooled up and formed a sizable lake. 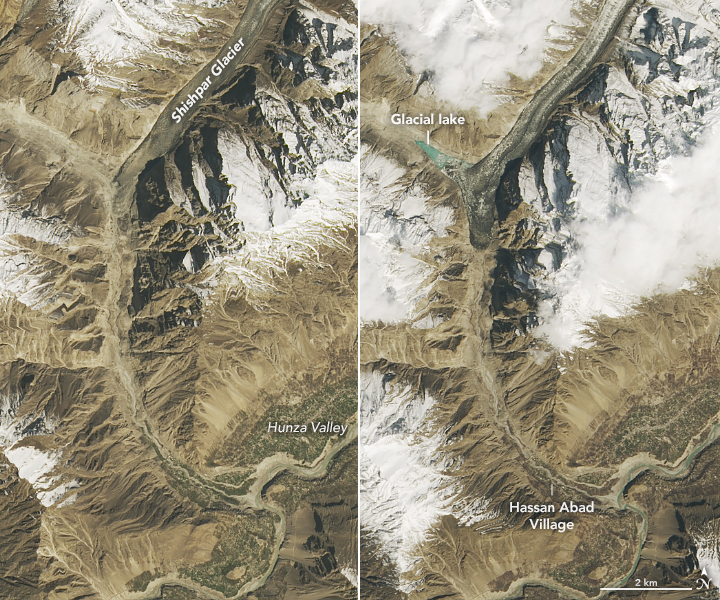 These images, acquired by the Operational Land Imager (OLI) on Landsat 8, show the position of the glacier and lake on April 1, 2019 (right), compared to April 5, 2018. The ice appears gray because dust, soil, and other debris are piled on top of it.

Generally, ice-dammed lakes like this are unstable and do not last for more than one season; most drain slowly and do not to cause any problems. But sometimes the ice dams collapse suddenly or lake water spills over the dam, causing fast-moving, dangerous floods. Because of this, scientists are conducting frequent ground surveys near Shishpar and analyzing satellite imagery daily.

In a release on April 27, the Gilgit-Baltistan Disaster Management Authority indicated that the risk of a damaging flood had decreased due to falling lake levels. In an earlier release, the group noted that hot weather in the summer could cause rapid melting and hazardous overflows, and they outlined several steps to reduce the risk of a flood disaster in communities downstream. In the case of a severe flood, a nearby section of the Karakoram Highway, large numbers of homes in the village of Hasanabad, important irrigation channels, and two power plants could all be affected.

The glacier’s surge has already had some consequences. One nearby power station went offline due to a lack of incoming water. Also, a key pathway that miners and cattle once used to cross the glacier safely became impassable. In August 2018, that change trapped cattle in summer pastures and prevented miners from reaching a work site, the Pamir Times reported.