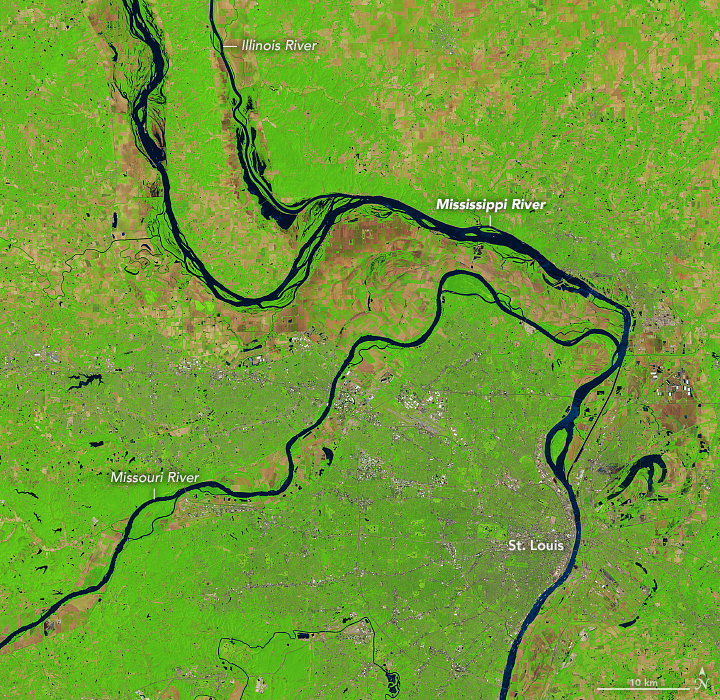 Flooding Continues Along the Mississippi

On May 9, 2019, the U.S. Advanced Hydrologic Prediction Service reported that 313 river gauges across the United States were above flood stage. All but five of those gauges were in the heartland of the United States, mostly within the Mississippi River watershed.

Thirty-two U.S. river gauges were above major flood stage, and 18 of them were within 200 miles of St. Louis, Missouri. Rock Island, Illinois, set a new local high-water record on May 2 at 22.70 feet. The Mississippi River crested at 41.33 feet at St. Louis on May 6—not a record, but a major flood nonetheless.

Towns along the main stem of the Mississippi in Iowa and Illinois have reported some level of flooding for the past six weeks, and recent water levels reached the top five highest on record for most stations. While flood waters have crested and started to recede in many areas, new locations to the south could approach flood stage in the next week as the pulse of water flows toward the Gulf of Mexico.

The Operational Land Imager (OLI) on Landsat 8 caught a rare opening in the spring cloud cover to observe the flooding along the Mississippi River near St. Louis. These false-color images were acquired on May 7, 2019, and June 5, 2018 (for comparison in the same season). The images were composed from a combination of infrared and visible light (OLI bands 6-5-4) in order to better distinguish water that is out of the river banks and on the floodplains.

The latest flood crests came after several heavy rainstorms in late April and early May doused the already saturated ground of the Midwest and Plains states. Beyond the Mississippi River, flash flooding has been a problem in Kansas, Missouri, Nebraska, Arkansas, Oklahoma, and Texas. Snow fell in the Upper Midwest on May 8, and more rain is expected across the Mississippi basin later this week.

This spring flooding was predicted by U.S. government climatologists and weather forecasters. In a national hydrological assessment released in March by the National Oceanic and Atmospheric Administration, forecasters noted: “The potential for major flooding due to well-above-normal precipitation, snowmelt, saturated soils, and frozen ground is high compared to its historical average across the Upper Mississippi River and Red River of the North basins.”