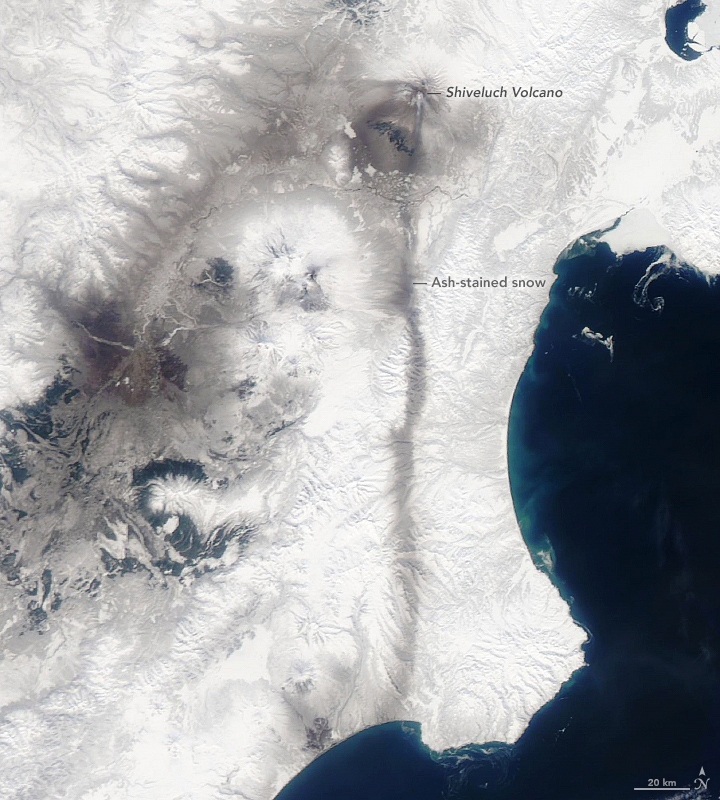 Ash and Snow at Shiveluch

For about 30 minutes on April 10, 2019, the ever-restless Shiveluch (also spelled Sheveluch) volcano on the Kamchatka Peninsula lofted a plume of volcanic gas and ash some 8 kilometers (5 miles) up into the chilly Siberian air. For about thirteen hours, the plume drifted south—enough time for scientists using satellites like Japan’s Himawari 8 and the European Space Agency’s Sentinel 2 and 3 to get a good look it.

Though the airborne plume was short-lived, the eruption left an unmistakable signature on the snow below. The day after the eruption, several satellites captured natural-color images of a trail of ash extending south for 220 kilometers (140 miles). The Moderate Resolution Imaging Spectroradiometer (MODIS) on NASA’s Aqua satellite acquired this image on April 19, 2019, ten days after the eruption.

In the winter months, ash-colored snow is a common sight on the Kamchatka Peninsula, one of the most volcanically active parcels of land in the world with 29 active volcanoes. As recently as March 2019, ash tracks from the simultaneous eruptions of two volcanoes attracted some media attention. In that case, fresh snow covered up the ash within a few days. 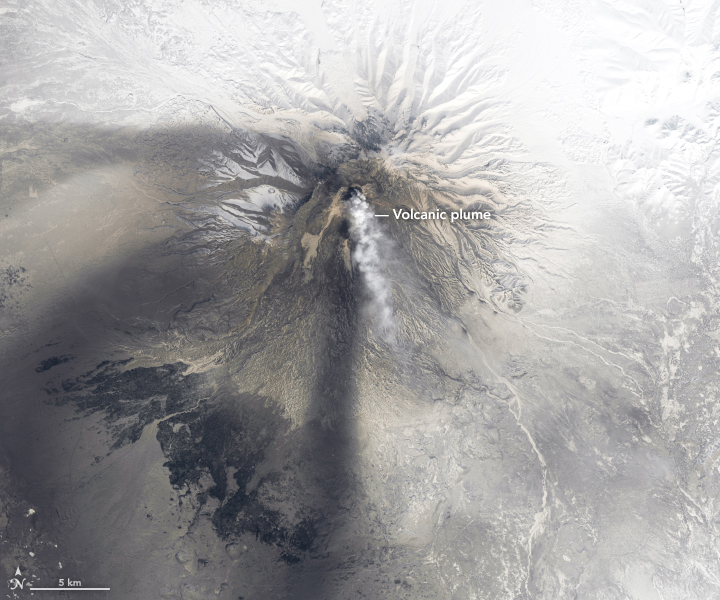 On April 19, 2019, the Operational Land Imager (OLI) on Landst 8 acquired a detailed view of the volcano. What appears to be a small plume of steam and other volcanic gases is rising from the summit.

The volcanoes of Kamchatka are defined by their inaccessibility. Fewer than 350,000 people live on the peninsula, mostly in Petropavlovsk-Kamchatsky. There are few roads, and helicopters are the only way to get around in many areas. As a result, the logistical challenges associated with installing and maintaining ground-based sensors make satellites a necessity for monitoring Kamchatka’s volcanoes.