Considered a hotspot for biodiversity, the Madre de Dios region of southeastern Peru is an exceptionally fertile landscape. Standing at the edge of the Amazon basin, Madre de Dios has a rich concentration of endemic species—plants and animals that are found nowhere else in the world. But their habitats are being threatened by human activity.

Since the 1980s, people have been clearing forests in this area for farming, cattle ranching, logging, and (recently) gold mining. To better manage this natural resource, the Monitoring of Andean Amazon Project (MAAP) by Conservación Amazónica compiles timely, easy-to-understand technical reports related to deforestation monitoring in Peru. The MAAP “hotspots” report inspired graduate research assistant Andrea Nicolau of University of Alabama in Huntsville, to map forest loss in Madre de Dios over a five-year span. Nicolau works with SERVIR, a joint initiative of NASA and the U.S. Agency for International Development to provide satellite data, maps, and other tools to environmental decision-makers in developing countries.

Nicolau analyzed nearly 3,500 square kilometers (1,350 square miles) of Madre de Dios land cover to determine the extent and severity of forest change between 2013 and 2018. She gathered five years of observations from Landsat 7 and 8 and then applied a technique known as spectral mixture analysis, which uses different properties of light in each pixel and other visual patterns to identify the proportions of land cover types. For example, newly-cleared areas for agriculture and cattle ranching tend to have a distinctive square pattern that can be spotted from space.

Nicolau found that roughly 206 square kilometers (79 square miles) of forest were cleared in the five-year study period, with the greatest loss occurring in the last year. Although it is hard to assess the reasons for annual changes in forest loss rates, one key element might be the completion of the Interoceanic Highway through the region, which could have facilitated the access to forestlands. 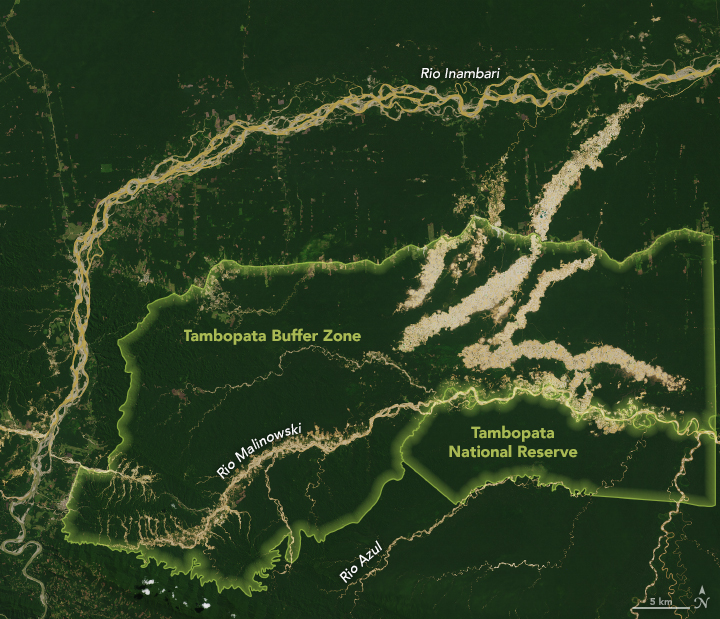 As revealed in these images and maps, forest losses were concentrated in the buffer zones around protected areas, such as the Tambopata National Reserve. Lands belonging to the Kotsimba Native Community, an indigenous Peruvian tribe, are also experiencing high rates of forest loss, especially due to gold mining. Those losses are concentrated along the Malinowski River, where small-scale mining operations use water from Amazonian rivers for gold amalgamation, a process to extract gold from a surrounding raw ore using mercury. Nearly half of forest loss in Nicolau’s image analysis occurred outside of legal mining concession areas.

Understanding the patterns and causes of forest loss over time is important for sustainable land management and for assisting in decision-making for policy and enforcement activities. It is also important for global initiatives such as REDD+, which estimates the carbon stored in global forests.