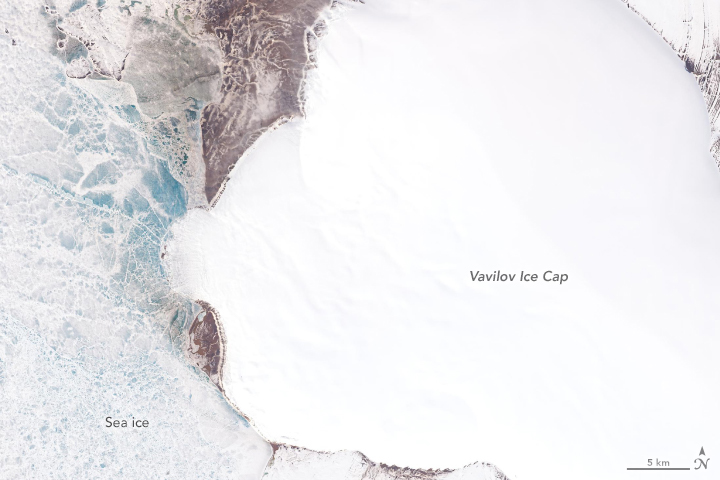 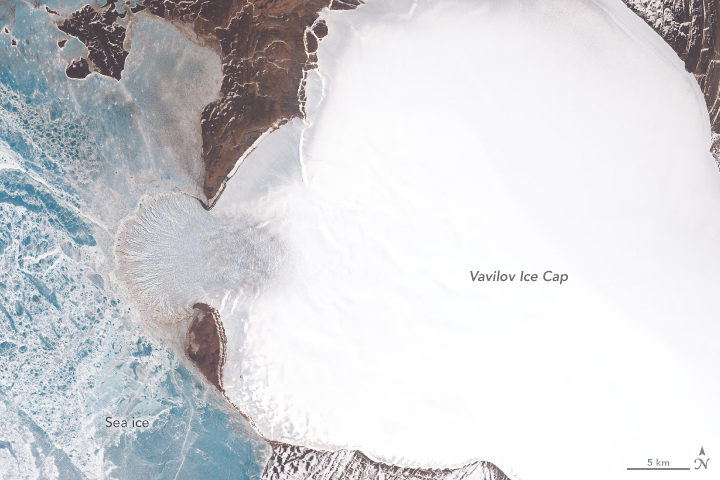 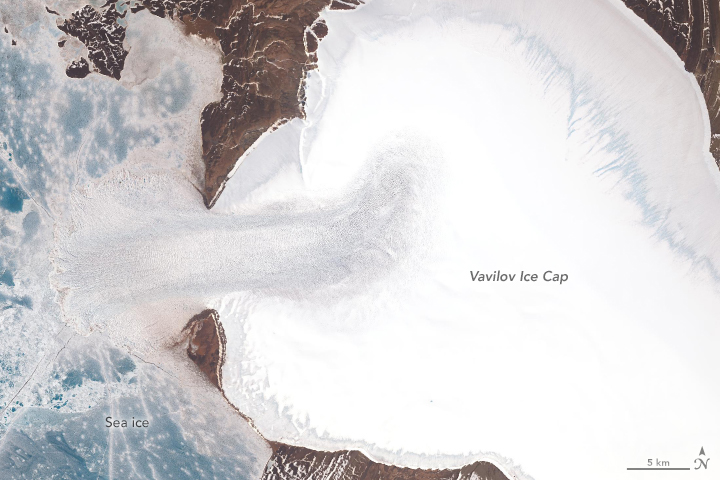 Glaciologists generally classify glaciers into two major types. In temperate areas, where summers are relatively warm and plenty of snow falls, warm-based glaciers dominate. This type slides easily, often slipping a few kilometers each year because water lubricates the ground and the base of the glacier. In contrast, cold-based glaciers dominate in polar deserts—the cold, high-latitude areas that receive little snow or rain. This type of ice generally stays fixed in place, rarely moving more than a few meters per year.

When a cold-based glacier in the Russian High Arctic began sliding at a breakneck pace in 2013, University of Colorado Boulder glaciologist Michael Willis was mystified. After moving quite slowly for decades, the outlet glacier of Vavilov Ice Cap began sliding dozens of times faster than is typical. The ice moved fast enough for the fan-shaped edge of the glacier to protrude from an ice cap on October Revolution Island and spread widely across the Kara Sea. 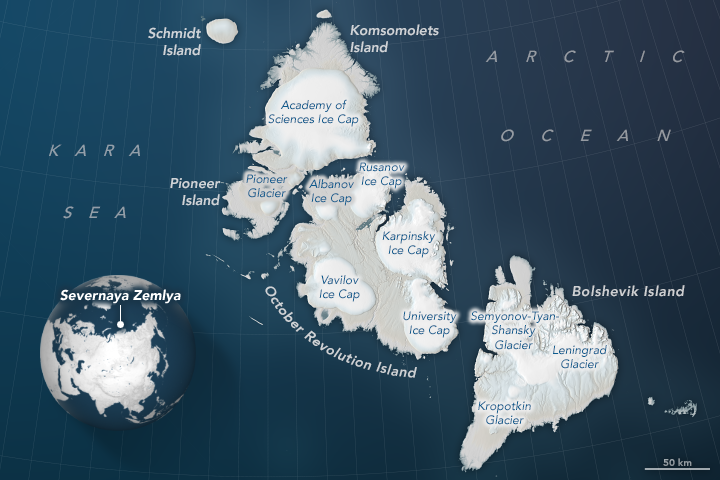 Landsat satellites have been collecting imagery of the glacier for decades. A time-lapse video, which begins with imagery acquired in 1985, showed the terminus creeping forward between 2000 and 2013, but at a modest pace—just enough for a tongue of ice to begin pushing into the Kara Sea. After 2013, the glacier sprang forward, accelerating rapidly. By 2018, the glacier’s ice shelf (where the tongue stretches over the water) had more than doubled. Meanwhile on land, the ice had thinned noticeably, particularly around the edges. (Note that in the images above, the blue areas in the Kara Sea are sea ice, not glacial ice.)

Willis and his colleagues are still piecing together what triggered such a dramatic surge. They suspect that marine sediments immediately offshore are unusually slippery, perhaps containing clay. Also, water must have somehow found its way under the land-based part of the glacier, reducing friction and priming the ice to slide. Observations from several satellites suggests that the northern and southern edges of the glacial tongue are grounded on the sea bottom, while the middle is probably floating, another factor that has made it easier for ice to push forward at a rapid rate.

The sudden surge raises questions about the future of Vavilov Ice Cap. Though the glacier’s pace slowed somewhat in 2018, it has sped up again in 2019. “If this continues, we could be witnessing the demise of this ice cap,” said Willis. “Already, Vavilov has thinned enough that snow has stopped accumulating on its upper reaches, and it is a small ice cap in the first place.”

Hundreds of cold-based glaciers line the coasts of Greenland, Antarctica, and islands in the high Arctic. Together they cover hundreds of thousands of square kilometers of land. The events at Vavilov suggest that these glaciers may be less stable and resilient and more capable of collapsing and affecting sea level.

“This event has forced us to rethink how cold-based glaciers work,” Willis said. “It may be that they can respond more quickly to warming climate or changes at their bases than we have thought.”