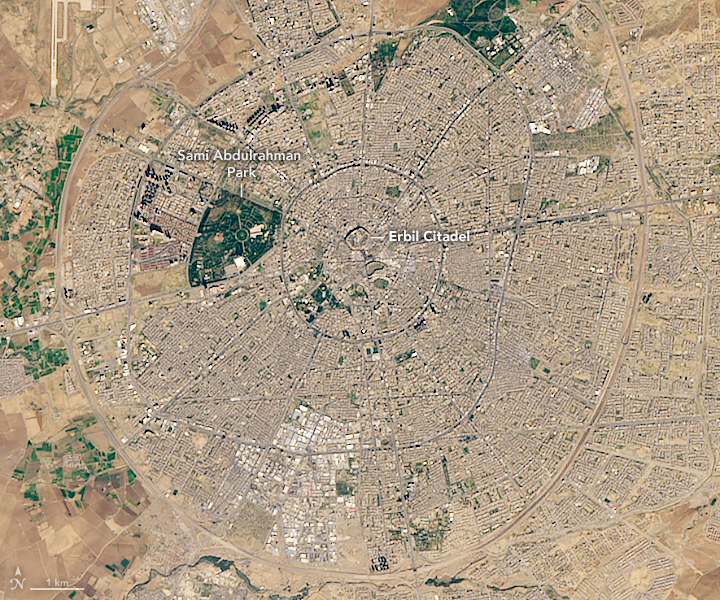 History on a Hill

As the world’s earliest known civilization developed in Mesopotamia...as Genghis Khan worked to create the largest contiguous land empire in history...as the Ottomans occupied European and Asian lands for nearly 600 years...each empire had one thing in common. They all set up camp on a small plot of land in what is now the Kurdistan region of northern Iraq: the Erbil Citadel.

The Citadel is possibly the oldest continuously occupied human settlement on Earth, dating back at least 6,000 years. Its extensive history is embedded in its own ground. It sits on an oval-shaped mound that stands about 32 meters (100 feet) high, built up from dirt, debris, and collapsed mud houses from previous human settlements. This ancient town within the heart of Erbil was added to the World Heritage List in 2014. It covers just over 10 hectares (24 acres).

This image of Erbil Citadel and its surroundings was acquired on November 20, 2018, by the Operational Land Imager on the Landsat 8 satellite. From above, Erbil Citadel appears at the center of what looks like a wagon wheel—perhaps more than a coincidence, as evidence suggests humans may have been living there during the Ubaid period, when humans invented the wheel. The Citadel is surrounded by the capital of the Iraqi Kurdistan autonomous region.

The Citadel is today surrounded by tall 19th-century walls, which once gave it an appearance of a formidable fortress. Within those walls, a maze of narrow alleyways and culs-de-sac branch out from the main gate and connect courtyard houses and public buildings—street patterns carried over from the Ottoman period.

Today, only one family lives within the walls, an arrangement by Kurdish officials in order to preserve the Citadel's title of “continuously occupied.” The town currently contains one mosque and various museums open for business. Several organizations are working to rehabilitate and bring new activities to the Citadel.