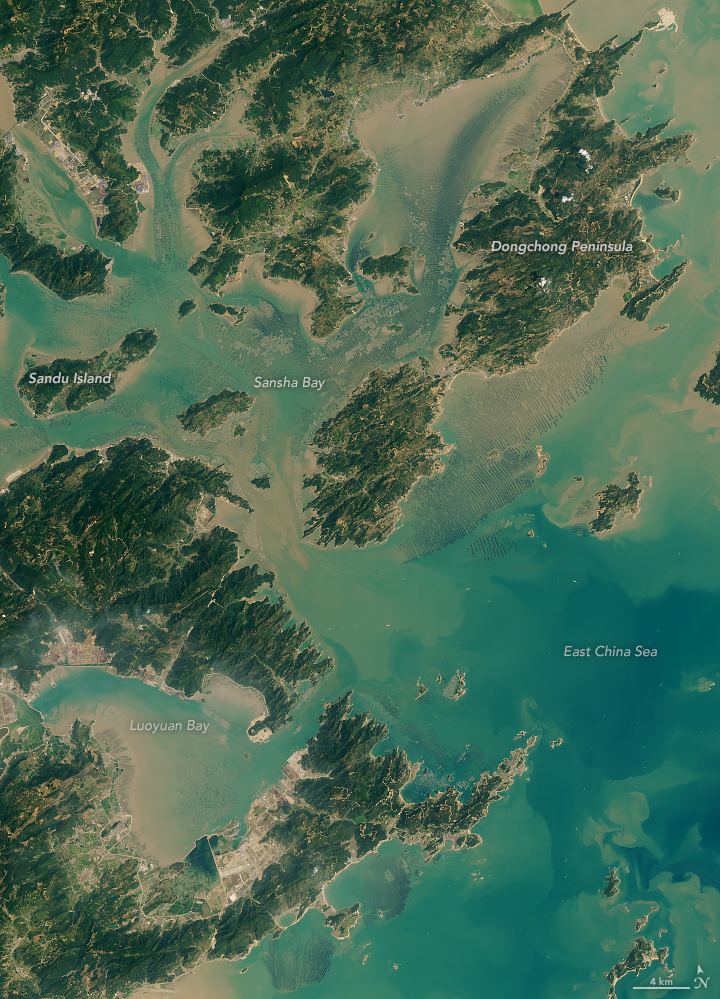 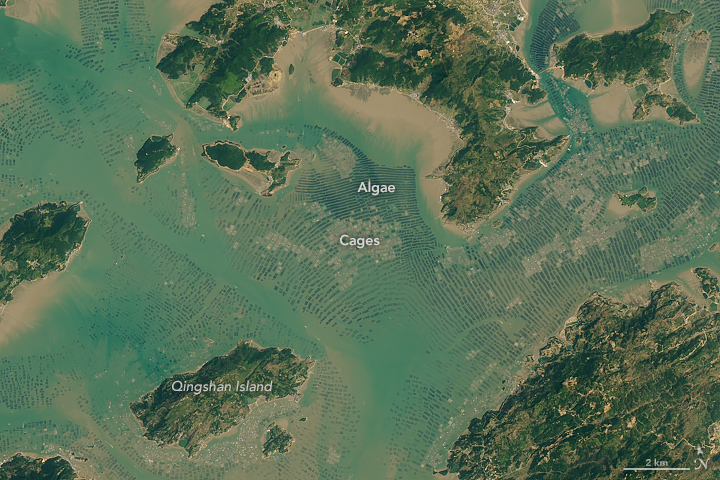 The large yellow croaker once thrived near the muddy bottoms of shallow seas and estuaries in eastern Asia. In the 1980s, however, populations of the popular table fish plummeted by more than 90 percent due to overfishing.

With the fishery decimated and even the survival of the species in question, the Chinese government launched a large-scale effort to learn how to artificially propagate large yellow croakers. The effort was based in the city of Ningde, which is situated in southeastern China along the shore of Sansha Bay.

More than two decades later, Sansha Bay has become one of the world’s most concentrated hubs of aquaculture. Look out over the sea from the city’s edge, and you will see a cluttered seascape filled with fish cages and nets; rectilinear grids formed by rows of seaweed; wooden walkways; countless boats; and houses and villages floating on the water.

The Operational Land Imager (OLI) on Landsat 8 captured this image of Sansha Bay’s expansive aquaculture sector on April 8, 2017. The OLI is capable of distinguishing between two key types of aquaculture. The lighter-colored areas near the shore are dominated by “cage culture”; the darker areas are generally “algae culture.” 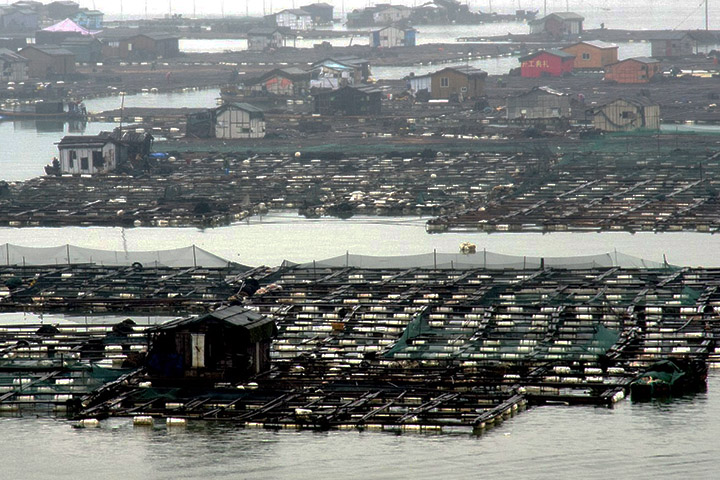 In cage culture setups (third image), mesh nets or cages confine the fish. Most of the cages in Sansha Bay are used to raise croaker, though the area is also known for producing abalone, octopus, bass, and several other types of sea life. The darker algae culture areas are dominated by kelp, laver, and other seaweeds growing along underwater ropes.

Many of the floating houses are used by the Tanka people, an ancient ethnic group that has a long history of living migratory lives on fishing boats. The group reportedly traces its roots back to the end of Tang Dynasty, a time when some people retreated to their boats to pursue fishing in the midst of political conflict and civil war.

Scientists have used Landsat satellites to track the rapid spread of aquaculture in Sansha Bay. In the early 2000s, activity was limited to some cage aquaculture clustered around Qingshan Island and Dong’an Island. Nearly two decades later, the waters around Qingshan Island (second image) have been filled to capacity with cages and other infrastructure. It is one of the densest zones of aquaculture activity in the world. According to one recent estimate, there are more than 300,000 cages for raising croaker and 40,000 baskets for raising abalone arrayed around the island.

The spread of seaweed has been even more impressive. While there was very little seaweed cultivation in the early 2000s, almost every branch of Sansha Bay had extensive seaweed production by 2019. The most dramatic increase occurred in Dongwu Bay (fourth image).