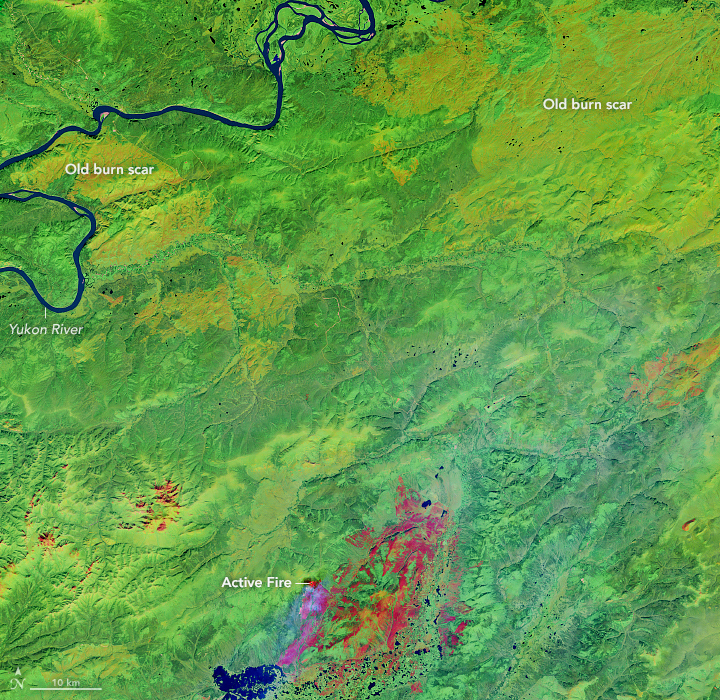 A sweeping study of landscape disturbances across Alaska found that about 13 percent of the state has undergone some form of ecological change in recent decades. Coastlines eroded, lakes expanded and sometimes drained, and glaciers diminished. But the biggest footprint on the landscape, according to scientist Neal Pastick, has come from wildfires.

These images show a part of interior Alaska northwest of Fairbanks, between the Yukon and Tanana rivers, where the fingerprints of wildfire are exceptionally evident. The images are false-color, which helps distinguish areas with vegetation from areas that have recently burned. The Landsat 7 satellite (ETM bands 7-4-1) acquired the first image (left) on August 6, 2002. Landsat 8 (OLI bands 7-5-2) acquired the second image (right) on June 25, 2016.

Pastick, a physical scientist and contractor to the U.S. Geological Survey Earth Resources Observation Science Center, examined 32 years of aerial photos and satellite images to identify areas of ecological change across the state. Even on short time-scales, the changes are clear. Notice that areas scarred by recent fires (red) in 2002 had become revegetated (light green) by 2016. Burn scars from fires prior to 2002 (yellow) continued to recover even as new burn scars dotted the landscape.

“We could still see greening trends and the impact of scars from fires that had burned long before our earliest Landsat images,” Pastick said. “I was surprised that we could see areas continuing to recover so many decades later.” 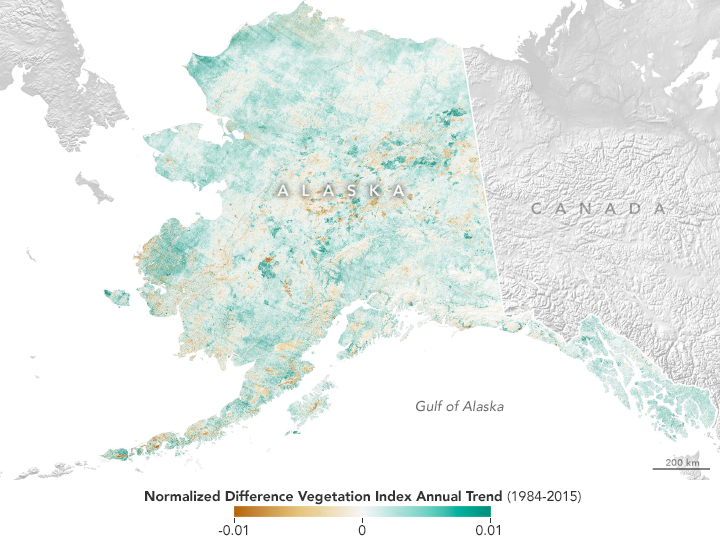 Another way to see how the landscape has changed is to measure the productivity of the vegetation, or its “greenness.” The map above used a satellite-based index to show the change per year between 1984 and 2015.

In the years after a fire, photosynthesis increases as new vegetation moves in. Some of the most productive areas (darker green) are stands of burned spruce that were replaced by deciduous trees. Other regions see a green up in areas where vegetation was previously limited by cold temperatures, permafrost, and ice. In contrast, brown areas are the result of stresses on the landscape, such as drought and recent wildfires.

“There is a big greening trend in the Arctic, which some people think is related to shrub growth due to increasing temperatures,” Pastick said. “Warmer temperatures can lead to growth in some places. But looking at individual regions, the picture becomes more complicated, as warmer temperatures also occur alongside drought and wildfire.”