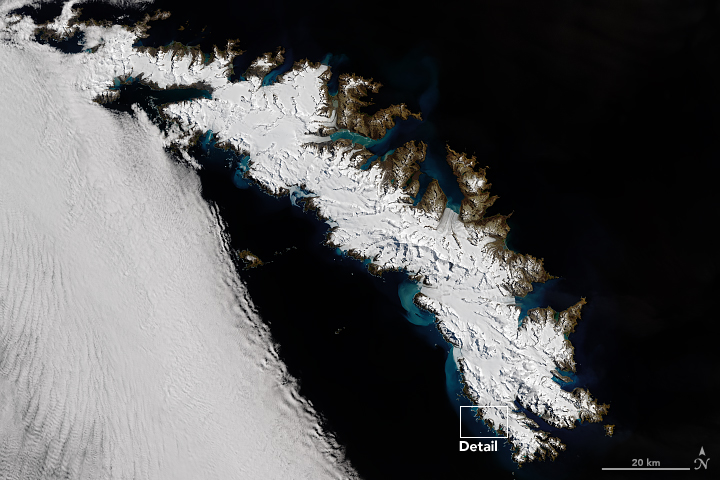 More than two centuries ago, Captain James Cook sailed around the Antarctic circle searching for the Southern Continent. Instead, he landed on an isolated island about 1,300 kilometers (800 miles) southeast of the Falkland Islands in the Southern Ocean. He became the first recorded explorer on the remote island, which he claimed for Great Britain and named the “Isle of Georgia” for King George III.

But the island was “savage,” according to Cook. As he described in a manuscript, “Pieces were continually breaking off, and floating out to sea; and a great fall happened while we were in the bay, which made a noise like a cannon. The inner parts of the country were not less savage and horrible.” Cook began mapping the coastline, but did not bring the ship into the island due to the dangerous conditions.

South Georgia is still known for its rugged terrain and inhospitable environment for humans. The island has 11 peaks rising more than 2,000 meters (6,500 feet) above sea level. The mountains shield the north and east coast from prevailing winds that blow out from the Southern Ocean and Antarctica. The island also supports 161 glaciers, several that are in retreat.

All of the images on this page were acquired by the Operational Land Imager (OLI) on Landsat 8 on December 25, 2018. The image above shows a clear view of South Georgia and the South Sandwich Islands. The image below gives a sense of the topography by overlaying the Landsat on a digital elevation model from the Shuttle Radar Topography Mission (SRTM). The Novosilski and Brøgger Glacier are approximately 13 kilometers (8 miles) and 11 kilometers (7 miles) long, respectively. 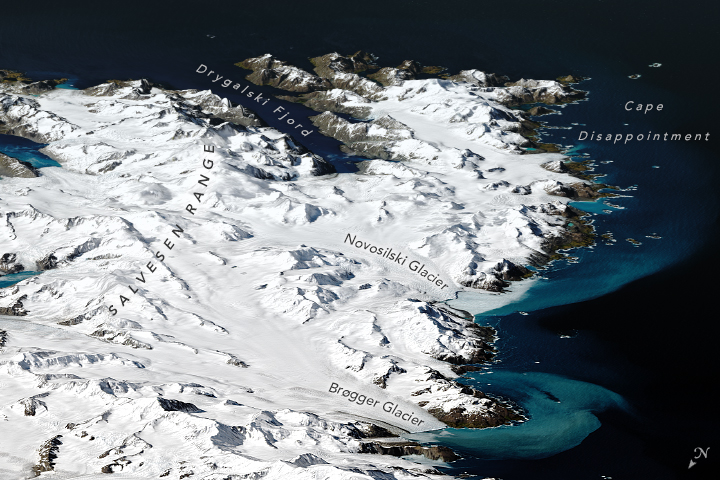 The island provides a unique ecosystem for wildlife. South Georgia waters are highly productive, supporting large populations of krill, which feed on phytoplankton and provide food for many marine predators. The steep terrain above and below the water line includes deep bays that shelter substantial populations of penguins, seals, and the globally threatened wandering albatross. Scientists have collected more than 30 years of population data on seabirds and marine mammals at South Georgia—one of the longest and most detailed scientific datasets in the Southern Ocean. 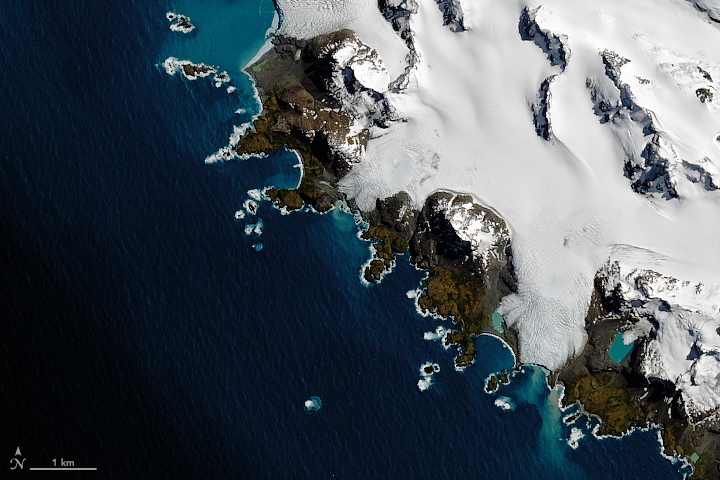 The final image shows the southern tip of the island. The discolored water near the shore is possibly due to phytoplankton blooms or sediments from the island mixing into the sea. The southernmost point has the quirky name “Cape Disappointment,” a label given by Cook when he realized he had not reached Antarctica.