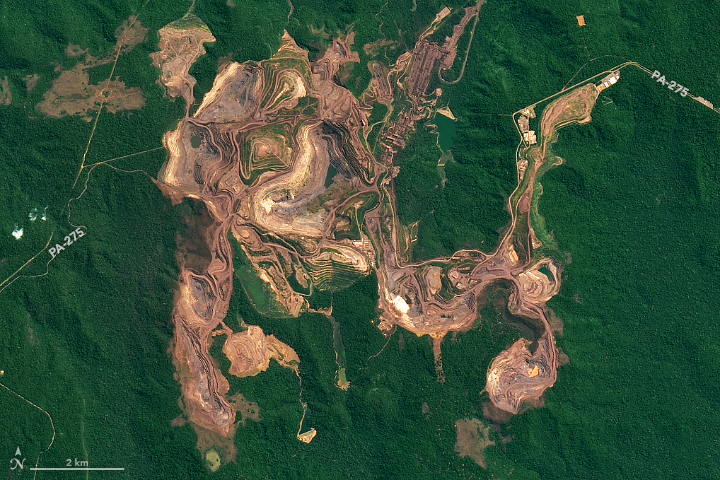 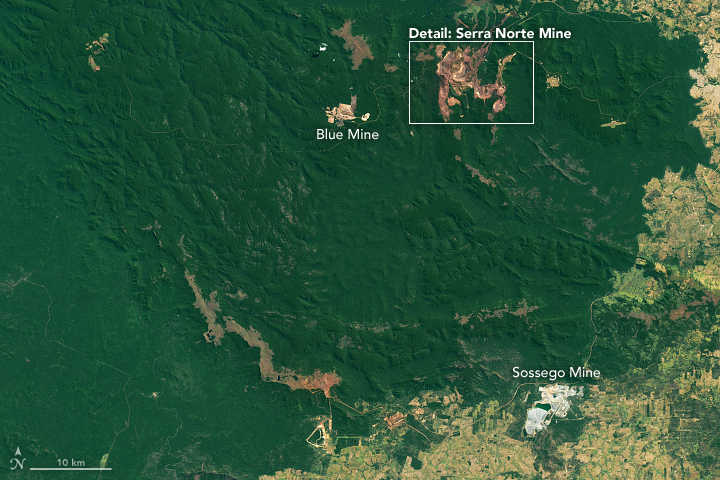 If you were to stand in the middle of the mines of Brazil’s Carajás Mountains (Serra dos Carajás), the dusty red terrain could be mistaken for a Martian landscape. Yet in the images above, indicators of human presence are everywhere. Excavator trucks dig in the deep pits, while off-road trucks move hundreds of tons of ore along dirt roads. This is among the world’s largest iron ore mining operations.

Viewed from space, you get a sense of how the Carajás mines fit into the wider landscape of the Amazon forest. In a scene acquired by the Operational Land Imager (OLI) on Landsat 8 on July 16, 2018, the red-brown earth contrasts starkly with the greens of the surrounding Carajás National Forest.

The detailed image shows the largest of these mines, the Serra Norte complex. The terraced appearance is a result of the open pit mining method, in which layers are excavated one at a time. Nine iron ore deposits exist along the Serra Norte (Northern Range). According to a 2013 study, mining at four of Serra Norte’s main pits had produced 1.2 billion tons of high-grade iron ore.

Most of the metallic mineral deposits among the ridges and plateaus of the Carajás Mountains and elsewhere in the Amazon are found in areas of rock that date back to the earliest part of Earth’s history. From the time that Earth’s surface solidified to about 570 million years ago, in the Precambrian, metals could more easily rise from deep in the planet and close to the surface. In addition to iron ore, the region is also rich in manganese, copper, tin, aluminum, and gold.

Scientists have been working to better assess how mining affects deforestation of the Amazon—the world’s largest remaining tropical forest—as mineral production has increasing value to the Brazil’s economy.