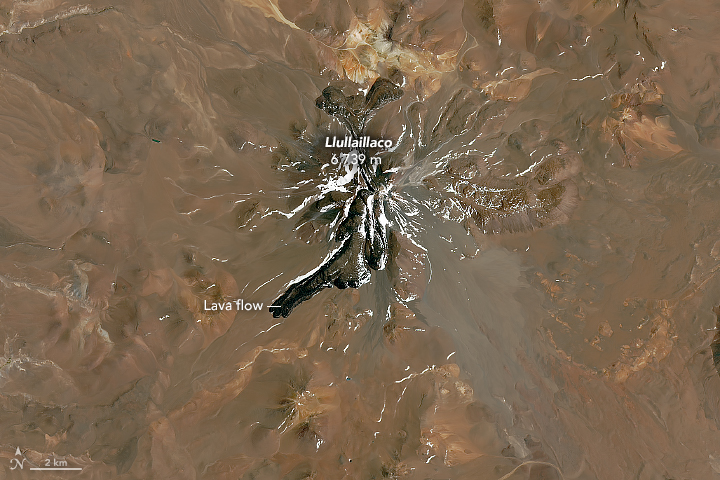 In 1999, an expedition of archaeologists climbed more than 6,000 meters (20,000 feet) up the Llullaillaco volcano to discover three 500-year old Incan child mummies, known to be some of the best preserved mummies in the world. At that moment, the South American volcano became the site of the highest altitude archaeological work ever undertaken.

The environment around Llullaillaco actually makes it a favorable place for preserving such finds. The volcano is located on the Chile-Argentina border in the eastern part of the Atacama desert—one of the driest places in the world. The high altitude of the Puna de Atacamas—a region of very tall volcanic peaks—also brings cold temperatures that allow snow and ice to linger on the slopes. The cold, dry conditions are believed to have helped preserve the centuries-old mummies.

Those conditions also make vegetation scarce. The region is home to a high population of two camelids (relatives of the camel): guanacos and vicuñas, which are adapted to high altitude regions.

The top image shows a nadir (straight-down) view of Llullaillaco, with evidence of lava flows. The image was acquired by the Operational Land Imager (OLI) on the Landsat 8 satellite on December 6, 2018. The second image was made by overlaying that Landsat image on elevation data acquired by the Shuttle Radar Topography Mission (SRTM). 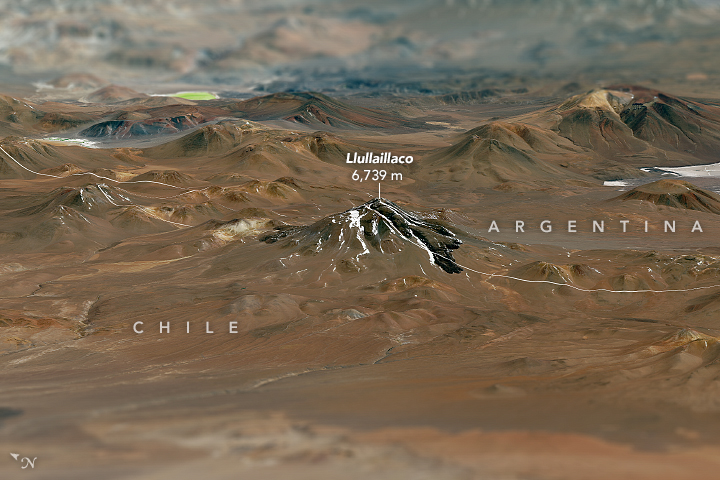 Llullaillaco formed in two evolutionary stages. The bottom of the volcano was built as a broad cone of thick lava flows. Part of this volcano collapsed about 150,000 years ago and produced a major debris-avalanche that sent deposits eastward into Argentina. About 10,000 years ago, Llullaillaco’s modern-day summit formed on top of the old volcano.

Llullaillaco is the second-highest active volcano in the world, second only to its neighbor Nevado Ojos del Salado. Thick, viscous lava flows from Llullaillaco have formed visually impressive structures called coulees, which appear in parallel ridges like pleats of an accordion. The last recorded eruption of the volcano occurred in 1877.