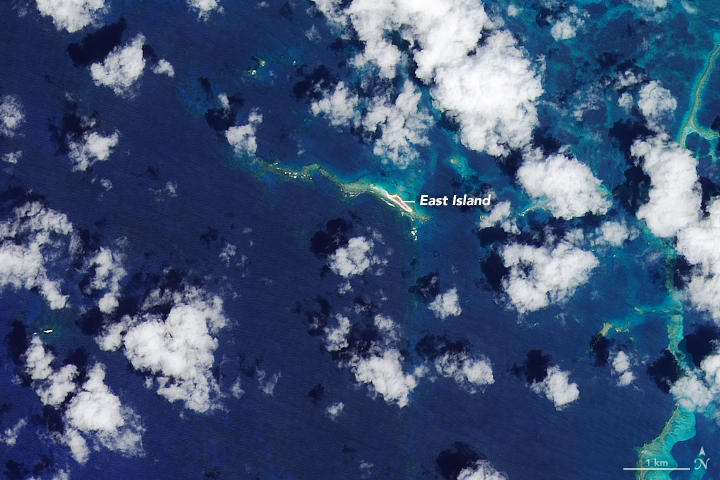 It’s not often that an island disappears off the map, but that’s just what happened in October 2018. A remote but ecologically important island was lost to the sea in the wake of one of the most intense hurricanes on record for the North Pacific.

Around October 3, Hurricane Walaka passed the Hawaiian Islands, including an archipelago about 900 kilometers (550 miles) northwest of Honolulu known as the Papahānaumokuākea Marine National Monument. Strong surges from Walaka inundated the shallow islets, one of which has been almost completely reclaimed by the ocean.

The Operational Land Imager on Landsat 8 captured these natural-color images of East Island on September 11 (left) and October 13, 2018 (right). The storm washed away the 11-acre strip of sand and gravel, and only two slivers of land have re-emerged since the hurricane struck. Storm surges also deposited sand and debris across Tern Island, which is northwest of East Island. 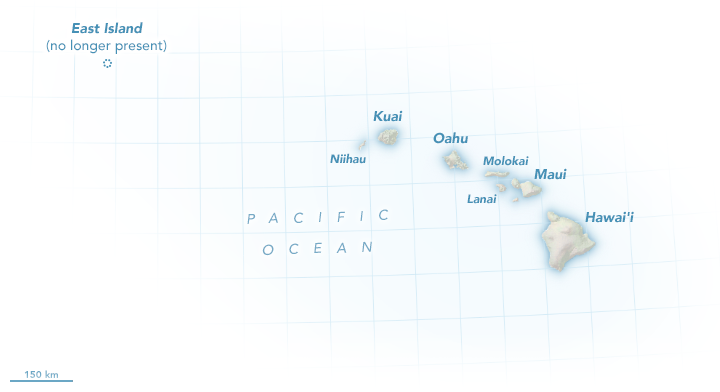 East Island is part of the French Frigate Shoals, one of the most significant coral reef systems in Papahānaumokuākea. The archipelago formed millions of years ago when a deep-sea “hotspot” created underwater volcanoes, which eventually rose to the ocean’s surface to became islands. While East Island was uninhabited by people, it provided nesting grounds for the threatened Hawaiian green sea turtles and pupping grounds for endangered monk seals, of which there are only 1,400 in the world.

Scientists believe many of the animals had already left the island before the hurricane hit because it was the end of turtle and seal breeding season. However, unhatched turtle nests were likely affected. Researchers must wait until next year to return to the islets for a more extensive survey of the impact on wildlife. In the meantime, a marine debris team worked within the Monument zone in early November to remove more than 160,000 pounds of lost or abandoned fishing nets and plastic that could endanger marine animals.

East Island is not the first island to disappear from the French Frigate Shoals. Whale-Skate Islet was lost to erosion in the 1990s, while Trig Island eroded earlier in 2018—a common occurrence in sand-dominated ecosystems. Scientists believe the mammals adapted to the ecosystem changes at Whale-Skate and Trig by finding new breeding locations, so they expect the same to happen now that East Island is gone.