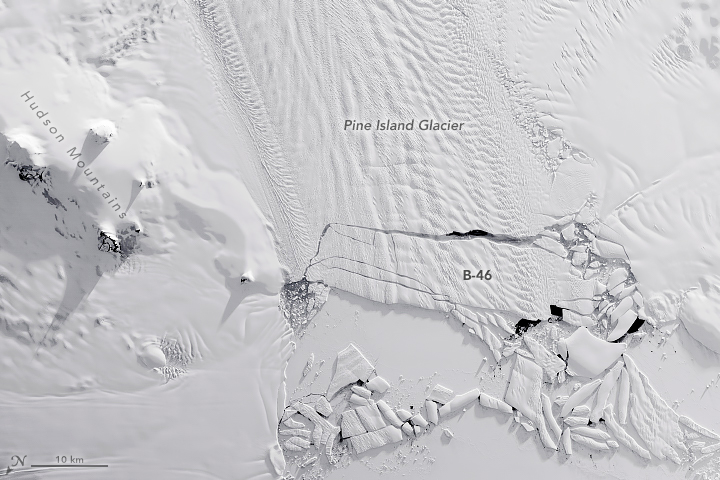 Pine Island Glacier in West Antarctica is known for dispensing icebergs into the Amundsen Sea, but the frequency of such events appears to be on the rise. The most recent calving happened at the end of October 2018, when the Sentinel-1 satellite observed the glacier letting go of about 300-square-kilometers of ice. The largest piece, named Iceberg B-46, accounted for 226 square kilometers.

The Operational Land Imager (OLI) on Landsat 8 acquired this image (left) of the new iceberg on November 7, 2018. For comparison, the second OLI image shows the same area on September 17, 2018, before a rift quickly propagated across the glacier and spawned the bergs.

By the time the November 7 image was acquired, a few pieces had already broken off from B-46 and reduced its size to about 185 square kilometers—still large enough to be tracked by the U.S. National Ice Center. Also notice that the bergs’ edges are tall enough and the Sun angle low enough to cast dramatic shadows on the sea ice.

Pine Island Glacier is composed of ice that formed on land as part of the West Antarctic Ice Sheet. The glacier’s ice flows seaward and extends over Pine Island Bay as a floating ice shelf. Areas of open water, or polynyas, are visible as the dark areas in the left image. This is where the accumulation of relatively warm water has prevented sea ice from forming.

According to Joe MacGregor, glaciologist and project scientist for NASA’s Operation IceBridge, the change in calving frequency is likely related to thinning of the ice shelf. Thinning can destabilize the shelf because it loses contact with “pinning points” that strongly influence how the shelf calves. Given Pine Island Glacier’s thinning, retreat, and contribution to sea level rise, it is closely watched by scientists. Operation IceBridge routinely surveys the glacier during its annual missions over the continent. The mission most recently flew over Pine Island on November 7, 2018, giving those on board a first-hand look at the new berg. Brooke Medley, IceBridge deputy project scientist, shot this photograph giving a northward-facing view of Pine Island Glacier (right) and B-46 (left).