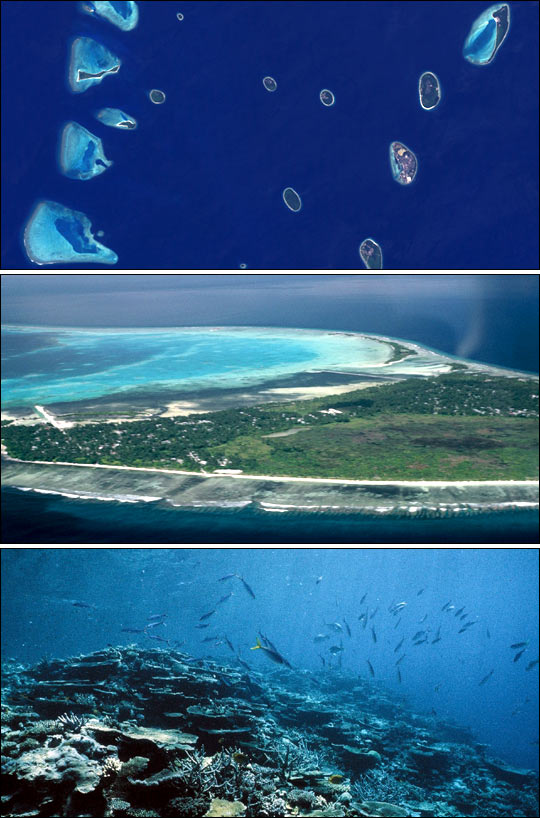 What immediately comes to mind when many of us think of an atoll is a desolate, circular array of coral reefs with white, sandy islands populated by a few lonely, swaying palm trees and perhaps a castaway or two. Were we to consider them more closely, however, we would find that this standard perception just skims the surface. Atolls are, in fact, some of the most complex and vibrant structures on the planet. Built diligently over thousands of years by tiny, sea anenome-like coral polyps, these ring shaped coral structures can be tens of kilometers in diameter with individual reefs large enough to support lush tropical islands and even small cities. As is the case with any living coral structure, countless species of fish and invertebrates can be found inhabiting the waters in and around an atoll. But unlike the fringing reefs along Florida’s coast or even the barrier reefs off the shore of Australia, atolls do not border anything. Instead, they sit on a coral base that often rises thousands of meters from the ocean’s floor in some of the most remote areas of the tropical oceans.

The top picture is a true-color image from the Enhanced Thematic Mapper Plus (ETM+) aboard Landsat 7. The middle photograph shows a reef and the flat, forested interior of an island in the Maldives. The bottom photograph demonstrates the diversity of life in and around coral reefs.

For more information, read Amazing Atolls of the Maldives.