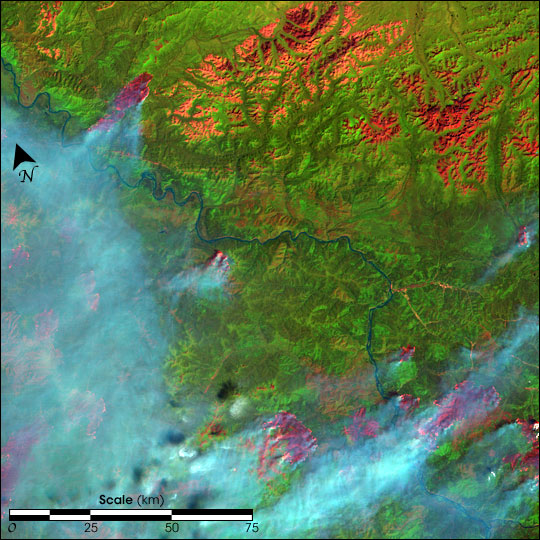 Fires In Alaska and Northern Canada

This colorful image shows the fires in east-central Alaska and west-central Yukon Territory, Canada, on June 30, 2004. The area shown is located to the south and east of the Yukon-Charley Rivers National Preserve. To make the image, scientists add color to electromagnetic energy that Landsat is able to detect, but that our eyes cannot normally see. So, for example, infrared energy (heat) appears bright pink around the perimeters of actively burning fires, while burned areas appear a deeper pink. Bare ground or low vegetation appears orange, while vegetation appears in shades of green. The blue river running diagonally across the scene is the Yukon.

This false-color composite uses data from shortwave infrared, infrared, and green wavelengths (ETM+ bands 7, 4, and 2). The image has been gap-filled to correct for the failure of the Scan Line Corrector (SLC) on Landsat's Enhanced Thematic Mapper Plus (ETM+) instrument.

Image by Jesse Allen, based on data from the United States Geological Survey EROS Data Center